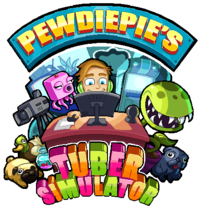 PewDiePie's Tuber Simulator is a game developed by Outerminds Inc. It is a 2016 freemium simulation mobile app featuring YouTube personality PewDiePie, who voices himself. The game's premise focuses on the player creating online videos for views and subscribers, the former of which they can use to purchase goods that can increase performance. PewDiePie's Tuber Simulator was released on September 29, 2016 on iOS and Android. The game became the Apple App Store's top download on its release day and on the following day Kjellberg reported that the app had been downloaded over one million times. [ Read more  •  Publisher ]

How to help
See how you can help contribute to PewDiePie's Tuber Simulator Wiki! Remember to maintain a standard for grammar and punctuation in your contributions, please.

Register
Register an account to keep track of your contributions.